Nestled within the same grounds occupied by the New Hall, Hardwick Old Hall is an atmospheric shell of what was obviously once a grand building. The Old Hall sits on the site of the birthplace of Bess of Hardwick, a figure of high importance in Elizabethan society. Through advantageous marriages, she rose to the highest ranks of nobility and became very wealthy on the way. When she became a Countess, she replaced her father’s medieval manor with the Old Hall.

Bess built the Old Hall between 1587 and 1596. Before the Old Hall was complete, she began work on the New Hall. The Old Hall, however, was not abandoned but was designed to complement the New Hall and both were to live on as testaments to her wealth and status. A thoroughly modern mansion in its day, Bess drew on Italian influences and incorporated them into her house design.

The Old Hall itself, is managed by English Heritage though the New Hall and surrounding grounds are National Trust. However, tickets for both Halls can be purchased at the ticket office or if you are a National Trust member (which I am and well worth it too!) you can still get into the Old Hall for free.

Though the Old Hall is a ruin and open to the elements, there is still much exploring to do and and fascinating features to be seen. With a little imagination and help of the information boards, it is quite easy to ignore the carpet of grass now covering the floors and picture the rooms as they once were. 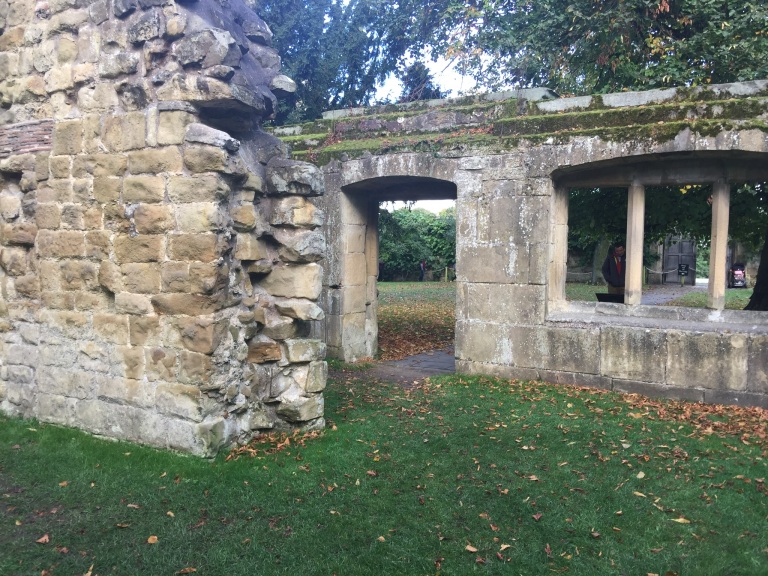 It is possible to climb through the four floors of the house and rewarding too. The elevated position allows you close-up views to the magnificent Elizabethan plaster friezes that adorn the walls and fireplaces. How glorious they would have been in their day.

For me, ascending through the different levels of the Old Hall would be worth it just for the view from the top. In one direction, for miles and miles, you can see the rolling fields of the stunning Derbyshire countryside and in the other a magnificent view of Bess of Hardwick’s New Hall not afforded by any other position.

Visiting the Old Hall will certainly satisfy minds interested in Elizabethan architecture and the life of one of the most remarkable women of the time. Additionally, it’s bloody good exercise getting to the top!

Historian and writer View all posts by Marie Murphy

This is a text widget. The Text Widget allows you to add text or HTML to your sidebar. You can use a text widget to display text, links, images, HTML, or a combination of these. Edit them in the Widget section of the Customizer.
Loading Comments...
Comment
×
<span>%d</span> bloggers like this: